I work in a building with a commercial kitchen. For the summer, our local food bank has been using our kitchen to prepare lunches for those students who had been getting assisted lunches during the school year. On the day they made peanut butter and jelly sandwiches they had some bread left over and didn't know what to do with it. I told them I'd be happy to make all the volunteers a french toast casserole. 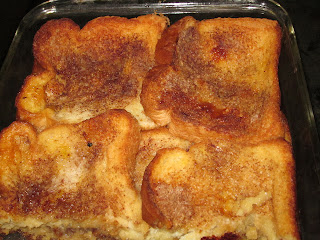 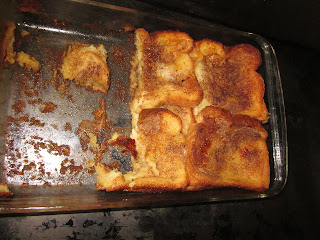 This was easy to make and everyone loved it.
12 slices of bread (I used store brand white bread as that's what was leftover)
1 stick of butter
5 large eggs
3/4 cup brown sugar
1 large teaspoon cinnamon
1 1/2 cups milk (I used non fat)
Melt the butter in the casserole dish. You can do this either in the oven or in the microwave. Mix together the brown sugar and the cinnamon. Cover the bottom of the casserole dish with six of the slices of bread. Because I was using white bread, I was able to make it fit very nicely. Sprinkle half of the brown sugar/cinnamon mixture over the bread. Place the remaining six slices of bread on top. In a small bowl mix together the eggs and the milk. Pour the egg mixture over the bread. I went slowly allowing the bread to begin to soak up the egg mixture. Sprinkle the remaining brown sugar/cinnamon mixture on top. Cover with foil and refrigerate several hours. I had this in the refrigerator over night.

In the morning, preheat the oven to 350 degrees. Keep the casserole covered and cook for thirty minutes. Uncover and cook an additional fifteen minutes. I then kept the casserole in the turned off oven for another fifteen minutes while I got ready for work.
I brought maple syrup with me. I saw a few people pour warm syrup on the french toast. It's very sweet and so I ate it without syrup.

Yum, looks like something my mom use to make ;)

That sounds amazing!!! I am going to make that next time I have people spend the night!! YUM!

This recipe sounds so easy and tasty, even with plain white bread and I can imagine it with other breads too. Thanks for sharing, Audrey.