Tonight's dinner was delicious. I really strayed from the original recipe. I'll try to share both versions with the photos.

The recipe called for 3 cups of cubed chicken. I used boneless skinless chicken breasts and made 4 of them. 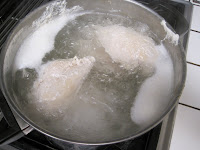 I boiled them about 40 minutes. Then I cut them into cubes. Each breast was about one cup, so my recipe used 4 cups of cubed chicken. 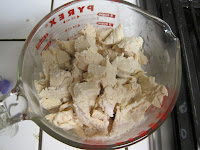 The recipe called for 6-8 ounces of stuffing. I buy the boxes at the dollar store. I used one and a half boxes. Each box is 5.5 ounces, so I ended up using about 8 ounces of stuffing. The original recipe called for one cup of melted butter. I used 1/2 cup of melted butter and it was fine. I melted the butter and then added in the stuffing and mixed. 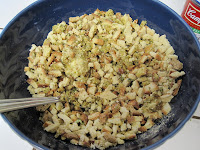 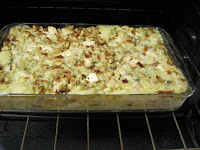 Bake about 30 minutes at 350 degrees. I then added shredded cheddar to the top and baked another 5 or 10 minutes. 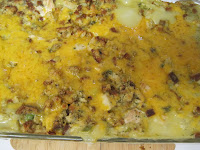 We all loved it. I served it with a salad and we were all full. So, here's the recipe all in one place:

Melt the butter and mix in the stuffing. Mix together the soups, milk and chicken. Add in the stuffing mix and mix together. Pour into casserole dish and bake 30 minutes at 350 degrees. Top with cheese and bake 5 more minutes.

Try different soups for different flavors. My daughter does not like carrots, but frozen peas and carrots would be great in this casserole.

Let me know if your family tries it.

This sounds interesting! I'll have to ponder it a bit; I generally avoid cream soups because I'm paranoid about the fat content, although of course I know there are reduced fat versions. But then I'm paranoid about those too -- it they don't have the fat, what the heck are they made of?! ;-) But I'm sure there's some variation I can come up with that will make me happy. Thanks for sharing!

Audrey, no, I hadn't seen the shoe paper clips. Will definitely put them on "the list" for a later post -- thanks! ;-)

Hi Audrey,
Yet one more recipe I can't wait to try. Thanks so much for including your version... I often stray a little and way too often I forget to write down what I changed! I've tried almost all of your recipes, and we've loved every single one - I'm sure this won't be different :)

Hi Audrey,
We made this recipe last night, and boy-oh-boy was it delicious! I've tried other "chicken & stuffing" bakes, and have been less than impressed with the end result. HOWEVER, this recipe was sooooo incredibly good - we LOVED it. I used your variation, and totally agree; no extra butter or sodium needed. My only problem with yummy comfort-type casseroles? I don't have a "stop" button. I eat and eat and eat until I can't stand it anymore...... but no worries, I was thoroughly delighted and happy to be stuffing my face the entire time!

Oh, one more thing.... I used my Tupperware Quick-Chef (is that what it's called?) to chop / shred my chicken. That kitchen gadget is the best thing to happen to me since sliced bread! I use it for everything........ looking forward to the sweet potato casserole tonight!